So this weekend I was in Spring Valley, WI helping my dear friend Ali with her store opening of Bizzing Bea! I was pretty excited: No toddler, Country living and cheese curds! I even wore my cowboy boots to fit in. Though I learned no one wears cowboy boots in small towns and my act of trying to fit in was received with laughs by the locals. Here are some pictures of Ali’s store:

Bizzing Bea is more than just cloth diapers and pacifiers, there are also treats for moms of the babies. Including: Lunette cups, Essential oils ( LuSa Organics), Watkins cleaning supplies ( which are safe to use around kids), and Noodle and boo. All awesome for adults and kiddos OK will except the Lunette cups. The store has a beautiful open layout. I highly suggest you visit this week if in Spring Valley (Store at the moment is a trial run and will close Thursday until things are sorted out).

Though eventually we were taken over by the babies of the store, here is their picture story:

Then trouble came in from the west: 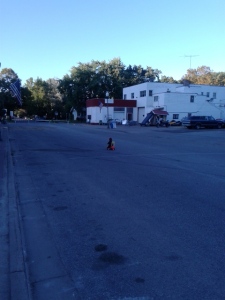 Where he stopped at the local bar for shots of breastmilk before he started trouble in town: 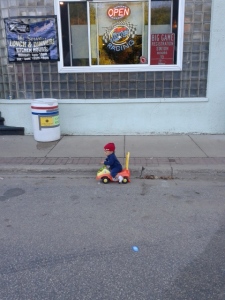 Then he stopped at Bizzing Bea and attempted to destroy the store with diaper pins : 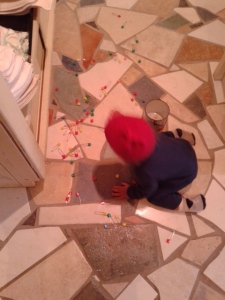 This landed him behind bars: 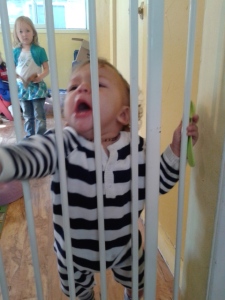 Well after begging and pleading he and the store owner made up: 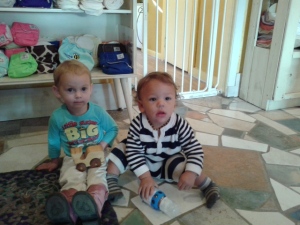 Then he left town to never ever return: 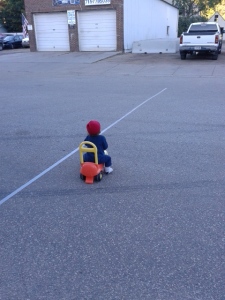 Then some how the adults put Ella in baby jail and we took back the store though no pictures of that battle.

Now time for a story. I have learned even if I cross state lines crazy ish still happens to me. This time I discovered I was allergic to bees. Yes bees which Ironically is the mascot of Bizzing Bea.  I even had received a warning before all of this craziness happened. During a babywearing demo I was teaching at the store, a woman had warned the kids to not leave your pop outside, that the bees would go after it. I apparently decide to be idiot of the day. Because with in 2 hours I was sitting on our parade float, with a pop that had been opened for about an hour. Just before I drank from that pop Ali’s husband had just chased a bee away. Well I drank from my pop, a second later I felt a sharp pain and something fighting to get out. I spit and cried and there was the bee. Now most people would have some swelling after being stung in the mouth. Well I had some swelling and more.

Here is me before the sting: 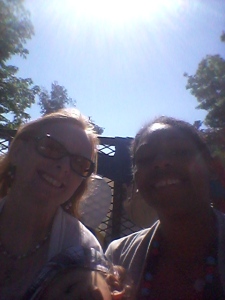 Here is me after:

Oh and by the time I arrived to the E.R I had a natural duck face: 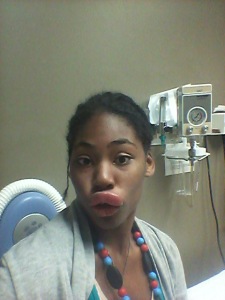 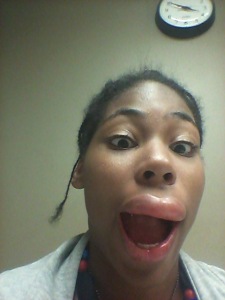 Though after a steroid shot and a ton of Benadryl later I looked a bit better and slept the rest of the day away.

Now on to the giveaway!!!

So in honor of Ali’s store opening we have a pretty sweet giveaway! A Bottombumpers custom Diaper!! With the Bizzing Bea Bee on the butt!!! 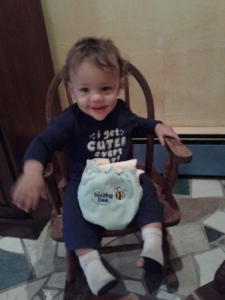 This diaper is a Large and light blue. I wanted to steal it for myself. Baby is not included. (Retail value $25) Enter Below:

Bottombumpers diapers are made right here in America!  More about them here: Bottombumpers

You can also find them in Bizzing Bea and online Bizzing Beas website.

Good luck on the giveaway! Also if in Spring Valley this week come visit the store! Also avoid drinking pop that has been sitting out in the open, there may be a bee in it.

I have to admit I may have adult ADD which has resulted in a Catbird Baby Pikkolo Carrier to sit on my bookshelf for a good two months. I thought the box has made a great decoration to our home. Yet my husband disagrees and has said it needs to go, like now.

Well I first bought my Pilkkolo online, at this point I had an ergo but wanted another carrier. Well it came i the mail and it instantly became my hiking and dog park carrier because of the back strap cross support in the back when I would carry Lyam on my front. 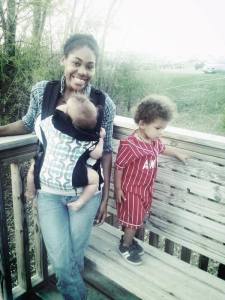 The Pikkolo is based on Mei Tai style Carriers.

Carrier includes a hood, chest strap and instructions.  There is an optional Support waist belt, I never used one with mine.

You can do a Front carry ( Never tested it out here. Says that front carry is ergonomic, yet I have doubts about that), Hip Carry ( I loved the hip carry with this carrier better than with any other soft structure carrier), and Back Carry.

The fabric felt great! No having to breaking in!

My favorite feature No falling down pants. What do my pants have to do with a carrier? I am not the only one who has put a carrier on and once you start walking your pants start to fall down? Well the fact that there is no supportive belt and you have a fabric only like waistband your pants will never fall! Its like Magic. Though you can buy a supportive waist band, and it is suggested for children over 20 pounds. I never felt like I needed one.

Though this carrier did not go knee to knee fabric wise with my oldest who is two. It was surprisingly comfy and the fabric came pretty close to his knees. Though Fabric to knee is not required, it can make carrying bigger kids more comfortable.

Storage. There is no storage compartments for anything on the Pikkolo. So this carrier would not be an all day around town carrier for me. So though I used it for hiking. I could not go hiking all day with it.

Thought the memory padded straps are great. They tend to be bulky for putting it in the diaper bag. Yet though I am pretty sure you can have one or the other and not everything.

If you are petite … this may not be the carrier for you. The straps are wide and may “overwhelm” you.

The webbing while strong, was too hard to pull through to tighten the carrier. At some points I would have to take the carrier off to tighten it. Yet mt Carrier is an older version. So this may have changed.

Due to the pikkolo not having a supportive belt automatically. My husband found it confusing. Yet all husbands are different.

Over all the Pikkolo is pretty great. I would give it 4 out of 5 stars

Now enough of my rambling on. Would you like a chance to win a Pikkolo? Thanks to Catbird Baby you can!! Just enter below!

If you are a parent you are fully aware that if you kids are quiet, you need to be worried. Usually in my house this means a floor or child has been colored on with a magic marker, or there is a clogged drain and the bathroom may become a swimming pool if I don’t stop it.

All of these quiet incidences have been innocent. Except last night.

Last night for some reason I decided to do laundry. I never do laundry, but at this point I couldn’t act as if the hill of clothes in the hallway wasn’t growing. Nor that there were some questionable smells coming from that hill. For all I know that hill may have turned into a monster that eats socks.

Well like any other day I grabbed our Tide Pods. I love these things and they work for our clothes and cloth diapers.

Now I have heard stories about things going wrong with pods and kids getting into them. So my husband and I decided to keep them on a shelf in our closet in between use. This is the shelf I put the pods back on when going to fold laundry.

Well as folding laundry, the boys went into their room to play and were really quiet. Quiet enough I mentioned it to a fb friends about how I should worry. So I set my laundry down and went to check on them.

As I walked into the hallway it smelled like laundry soap, I saw the boys in their doorway. Lyam was not only covered in soap but had three broken soap pods in front of him and one in his mouth…broken open.

As I discovered this my husband walked right in the door. Who at that moment had a “what the heck did I just walk to” look on his face. We immediately washed Lyam off and collected pods. This is when I asked friends in a chat I was already in  “do you bring them to the E.R.” In which their response was ” YES BRING HIM IN NOW!”

So we grabbed sippy cups and sped to Children’s hospital. When we arrived the nurse was already ready for our arrival ( we called a nurse line on the way). This was the point I realized that Lyam eating soap was way more serious than a ha-ha he got into soap.

After a work up and 2 hour observation Lyam was found to be OK to go home. He crawled away with just small little burns in his mouth ( irritation they called it), but is doing well.

Yet we learned a lot from last night.

If your child gets into the pods and has swallowed the soap get them to the ER right away. Usually once you clean the child up you notice the drooling and think oh they are fine. Yet within 10 to 20 mins from the incident the child can start to puke and then go unconscious due their tongue and throat swelling.

The tongue and throat can swell due to being chemically burned. This can land your child on a Ventilator to breath until these burns heal.

Also keep these pods far away from wondering babies and toddlers. Somewhere that even with a stool the child can’t get to them.

As for the Tide company, I will be writing a letter asking them to redesign the lid of the container. My toddler was not only able to open the container but he took the top off the container

As for the left over pods – they are in the trash, in a dumpster. 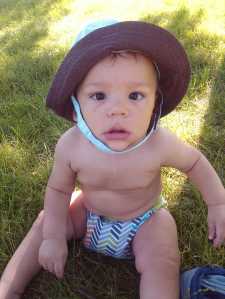